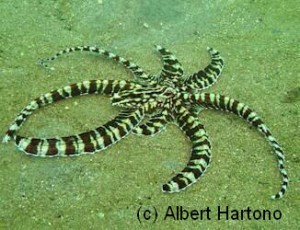 Unlike other species of octopi

, the Mimic Octopus does not live in coral rich areas. It lives exclusively in silty environments. When muck diving in Sulawesi became fashionable, divers discovered this fascinating creature. Another photo of a Mimic Octopus from Gorontalo is available on our Muck Diving page.