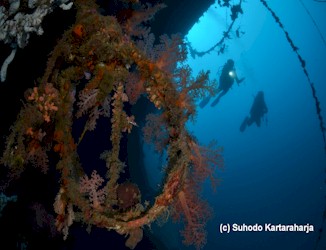 Indonesia’s most famous wreck is undoubtedly the Liberty Wreck in Tulamben, Bali. For those diving Sulawesi, there are few options for those who wish to dive wrecks. However, Miguel’s Diving has discovered several wrecks over the years in Gorontalo waters.

The Tjenderawashi was a dredging barge. It overturned in a storm in 1993. In 2004 Miguel’s Diving staff measured and drew a map of this wreck. Take a look at the map on our Wreck Diving page. The map will appear among the images that scroll across the screen. Imagine what the wreck looked like a decade ago.To read more about Diving Sulawesi’s Tjenderawashi Barge Wreck, scroll down to read a description of the wreck. A brief history is included. Find out why so many metal drums are hanging from the sides of the wreck and scattered along the ocean slope. Have you discovered how we know it is named Tjenderawashi? Before you come diving Sulawesi’s hidden paradise in Gorontalo, read the Virtual Dive section. It will give you an idea of what to expect diving the Tjenderawashi Barge Wreck. You can locate the wreck on Teresa Zubi’s map of Gorontalo dive sites. Her site and its recommendations are a must for those diving Sulawesi.

Since we first discovered this wreck

, some changes have occurred. Coral growth has increased dramatically. A colony of branching Acropora coral thrives at the base of the crane tower. Storms and the corroding effects of salt water have opened up some sections not previously visible. Some of the drums have since fallen. That means the wreck’s appearance is still changing with time. The dramatic photo of this wreck was taken by Pak Suhodo Kartarahardja earlier this month. The shot actually looks through the remains of one hanging metal drum. When you are diving Sulawesi, be sure to make time to dive in Gorontalo and explore this fascinating wreck. 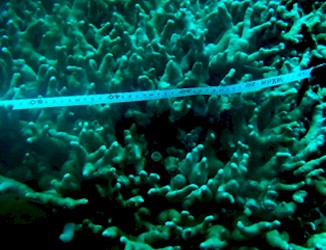 Despite being busy with divers, Miguel’s Diving also receives requests to help in scientific research projects. We are assisting in a coral analysis research project on the hard coral colonies living in Gorontalo. The coral analysis project began earlier in the year profiling the coral composition of the reef using measurement tape. We just sent underwater photos and samples of 30 hard corals to the researcher at Universitas Gadja Madah in Yogyakarta, Indonesia. Rather than damage the lovely hard corals found in Gorontalo reefs

, we picked through patches of coral rubble to match the type the research wanted. In Gorontalo seasonal storms break some sections of coral colonies, which collect in certain troughs. These areas of rubble are natural and not the result of negative human actions. Rubble areas here are in fact home to specific types of marine life, such as Fairy and Flasher wrasses. Best wishes to Mas Akbar Reza on his coral analysis research project!